2016            Invited to create a 5-page comic to be included in “WHAT HAPPENS NEXT? THE YOUNG CANADIANS, a special issue of the
Journal of Graphic Novels and Comics,” (forthcoming 2018)
Edited by Andrew Lesk (University of Toronto) and Barbara Postema (Concordia University)
Consulting editor, Bart Beaty (University of Calgary)

2012-16      Various comics for the Calgary and Edmonton Comic & Entertainment Expos, including “A Calgary Expo Alphabet,”
commissioned for the Calgary Expo’s 2013 Program (ink and pencil crayon, 2 pp), and my 2016 piece about post-partum
depression

2003            “Planet Waves,” story for the comics anthology “Project: Telstar,” Adhouse Books, Richmond, VA. Edited by Chris Pitzer.
Pen and ink with ink wash and metallic blue highlights, 7 pp
- “Project: Telstar” was nominated for “Harvey” and “Eisner” awards, Best Anthology and Best Production Design
- My story ("Planet Waves") was reprinted in Italian for the online comics magazine “Duepunti,” along with an interview with
me; Rome, 2006. Edited by Marco Milone.

2003            “﻿﻿Scenes from my Life in Canada following September 11th 2001, an Illustrated Essay﻿﻿,” commissioned for “﻿Canada
and September 11 – Impact and Response﻿”, Detselig Press, Calgary. Editors: Karim-Aly Kassam, George Melnyk &
Lynne Perras. Pen and ink with ink wash, 10 pp
- The anthology is a Canadian Studies textbook. My story was the only comics piece in a book of essays.

- Samples of my current comics work are often posted on my website: www.the23rdstory.com
- Many older comics/visual art projects are on my old portfolio site: www.thedrawingbook.com
SELECTED SELF-PUBLISHED COMICS/WEB COMICS

Since 2002, I have self-published several comics, from “mini-comics” to an 80pp volume in colour. I’ve sold comics at conventions and at comics stores in Calgary and Edmonton.

2010-14      “﻿Sam Hester’s Ramsay﻿” For about five years I’ve been writing a full-page comic for the monthly Ramsay Community
Association Newsletter. The series was inspired by a 2011 poster I drew for the Calgary Herald’s “﻿﻿Project Calgary﻿﻿” series.
“Sam Hester’s Ramsay” is collected by the Calgary Public Library’s Neighbourhood Archives.

2012            Compiled various print comics to share at Calgary Expo from my many years of (still-mostly-unpublished) sketchbooks
(“The Drawing Book Volume 1,” “The Jumble Pts. 1 & 2,” etc.).
- In 2014, some of these comics were purchased by Calgary Arts Development to be distributed to attendees of the
Mayor’s Lunch for Arts Champions.

I’m not a scholar. I just love Young Adult Fiction and was inspired to work on a few projects in my spare time. There is a lot of crossover between my interest in academic writing and the themes that inspire my comics. Some of my academic writing has also incorporated comics. These pieces were unsolicited submissions to peer-reviewed publications. I was amazed and delighted when I discovered, in compiling this CV, that my articles had been cited in The Lion and the Unicorn, the Canadian Review of Comparative Literature, and in an article presented at the Canadian Society for the Study of Comics Conference.

2007       “Crossovers and Changeovers: A Look Across Genre at Lynn Johnston and Margaret Mahy,” essay appearing in
“ImageTexT,” online journal of comics studies, University of Florida. Essay is illustrated throughout; ten pages are written as a
comic strip. Eds. Cathlena Martin and Charles Hatfield, 19 pp

2008      Sketchnotes and event poster, Panel discussion and AGM of the Association for Research in Cultures of Young People (ARCYP),
ACCUTE Conference, Vancouver (My sketchnotes were later included as part of the submission for an article entitled
“Past tensions and future possibilities: ARCYP and children’s media studies” by Stuart R. Poyntz, Natalie Coulter,
and Geneviève Brisson, published in the Journal of Children and Media Vol. 10, Iss. 1, 2016).

2007      Participated in the inaugural meeting of the Centre for Research in Young People's Texts and Cultures (CRYTC), ACCUTE
Conference, Saskatoon

2011-2016            I’ve also published quite a few short essays and articles on my blog, which sees 1000-2000 views/week,
on a range of subjects including Young Adult Fiction, multigenerational housing, local politics, the passing
of my dad, and my former life as a Bob Dylan groupie.

"Excellent, thanks so much, [your proofreading work] may make the article publishable!"
-Dr. Martin Koebel, Foothills Medical Centre, Department of Pathology, 2012

I freelanced as a proofreader from 2002-2013, working mainly with with ESL speakers and Canadians with learning disabilities, with a focus on applications, including the following:

Other proofreading clients included Catapult Marketing (Edmonton) and MK Strategy Group, Inc. (Calgary). In 2003, I was subcontracted
by Segue Consulting to edit and proof the final copy of the original 89-page Policy Review for the new Calgary Civic Arts Policy.

2013-16      Comics/graphic recording for VoteKit, a non-partisan “Get Out The Vote” volunteer initiative

2016            Visual notetaking to help tell the story of imagiNATION 150, a Calgary-based Sesquicentennial project

2011-15      Co-founder/ Secretary/ Webmaster: ﻿Vibrant Village Society of Inglewood & Ramsay﻿
Our non-profit received $12,000 from Calgary 2012, as part of Calgary’s Cultural Capital year,
to produce a series of “pop-ups” (“find it”) between 2012-2016. Some of our events, such as
the Inglewood Night Market, became self-sustaining, community-shaping events which continue today.
I created our website, www.finditcalgary.ca, from the ground up; I wrote all the copy that told our story
and enticed Calgarians to come out and join in the fun.

2014            Organized book launches (including promotion and website development) for my mom’s self-published collection of poems,
“Naked Under My Coat: Writing Under the Influence of Parkinson’s,” at Shelf Life Books and Loft 112.

2016       Recipient (in partnership with Calgary Reads) of a $10,000 grant from the Community Fund for Canada’s 150th
(“a national initiative and collaborative effort seeded by the Government of Canada,” distributed through the Calgary
Foundation), for curation of a colouring book inspired by Canadian children’s literature, featuring comics & art by
Alberta artists. Forthcoming 2017.

2016       Profiled in Calgary Arts Development’s “Storytelling Project” (“To raise awareness about Calgarians who, by living creative
lives, are making Calgary a better city”)

2012       Awarded a $1200 “Grassroots Initiative” grant (on behalf of the informal “23rd Avenue Ladies’ Group,”) for the
23rd Avenue Artwalk and Street Celebration, part of Calgary’s “Cultural Capital of Canada” year. I conceived
and organized this event, which featured about twenty local artists and artisans and prompted Calgary arts blogger
Binzento Vincente to write: “Officially I can call [23rd Avenue] the most artsy part of town.” I also built the event website
and wrote all the web copy (preserved on ﻿my own site﻿).

2006       “Top Finalist” (one of ten), in The Portrait Society of Canada’s annual international portrait competition, Art Gallery of
Ontario, Toronto

2005       “Highly Recommended*” for Canada Council Creative Writing Grant for “The Drawing Book,” an autobiographical
graphic novel (*Awarded but unfunded due to lack of funding at that time)
EMPLOYMENT HISTORY

2012-present       Principal, The 23rd Story (www.the23rdstory.com)
I work as a graphic recorder, creating large-scale visual records in support of a wide range of organizations.
As a silent observer and thoughtful transcriber of live events, I draw upon my experience as an unofficial
“comics journalist” of local events.

2005                      Accepted: MA, Creative Writing, Victoria University of Wellington, New Zealand
I was one of twenty students accepted into this program, supervised by New Zealand’s inaugural poet laureate,
Bill Manhire. I had applied with the understanding that I would receive an educational leave. My employer
cancelled its leave policy, so I had to decline the opportunity to pursue the MA program.

SAMPLES OF MY WORK

An earlier version of this resume had thumbnail images of some of the works on that list, so I've left those images below for quick viewing. Click on the titles for the links to larger versions of the images.

These one-page monthly strips, appearing in my community newsletter from 2012-2016, were inspired by a piece commissioned by the Calgary Herald as part of its "Project Calgary" series. The Calgary Herald comic is the image in the centre of this group.

Each year the Expo's Artbook features a theme: "Dreams & Wishes," "Fantastic Adventures," etc. Instead of drawing conventional superheroes and monsters, I chose to depict these themes as they play out in (my own) real life. I'm grateful that the Expo accepted my non-traditional submissions, which have been the only multi-panel comics stories in a book full of "splash pages," for five years; and also for publishing my most recent contribution, 2016's comic strip about post-partum depression. Here are four of my five Artbook pieces. 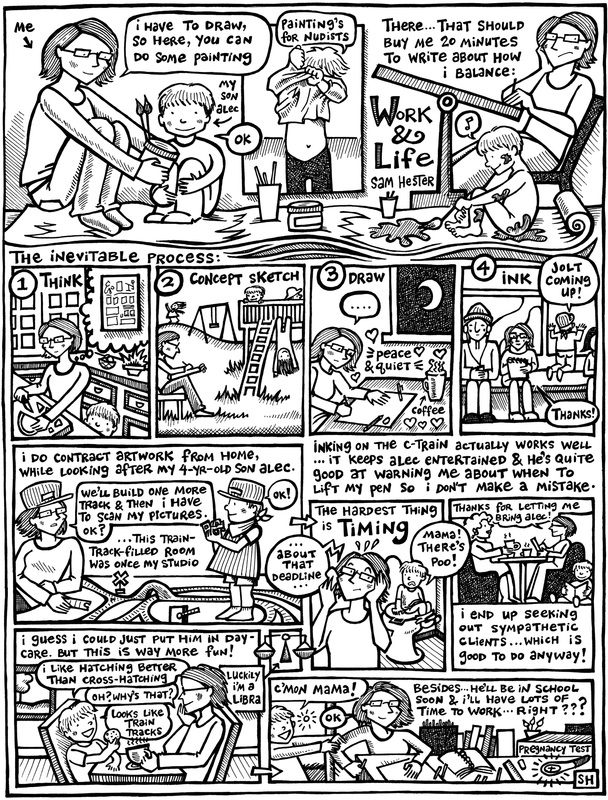 To round things off, here's a list of my work in the visual arts, not all of which is comics-related (and which isn't part of my Literary Resume, but which I'm just keeping here on my site).

Most of my work as a portrait painter and mural artist has been for private clients, but here are some examples of projects completed for corporate/non-profit organizations.